Like any child, You had your challenges. What were they?

Mark - "While most times I was quiet,and reserved, at other times I was excited and anxious to get a laugh. Getting hopped up on sweets didn't help," Mark laughed. "I loved to figure out what made people tick. I would spend hours creating a puppet or comic strip to get a chuckle out of a family member, classmate, teacher or neighbor. I also loved electronics, robotics, and mechanics. I could be found taking things apart, making experimental inventions, and trying to fix things, including electrical appliances. Amazingly I somehow survived every jolt and learned to respect the bounds between being alive and being fried to a crisp. I chose to live and became a became bit more careful with my little experiments."

So you liked to entertain but were a bit of an introvert. How so?

Mark - "I dreaded getting in front of a crowd. But when I realized I had to or needed to I made the most of it. It helped to have something to deflect the attention. That where my art and crafts came in. I remember planning and organizing my first elementary school puppet show for third-grade class during show-and-tell. I made the puppet myself. I used a knitted winter cap. I cut a small hole on the side and added buttons for eyes and stuck an orange sock through the hole and formed it to look like a bird's beak. For 20 minutes I entertained the class. The laughter was exhilarating."

Your next show-and-tell featured a larger creation, a creature he called a Croctopus? What was that all about?

Mark - "It was a four-legged smiley faced green dinosaur made from a bedspread, stick for the neck and a hand-drawn smiley face on a brown paper bag for the head."


You said for legs, all that was needed were two volunteers to get under the sheet?

Mark - "Yes, while the person up front held the stick with the head attached. We had the smallest class member sit on top of the Croctopus as if riding it. I remember the Principal stopping outside our door to see what all the laughter and commotion was about. We froze stiff, thinking we were in big trouble. Before I knew it the principal, the four-legged Croctopus, it's rider and I were walking the halls entering each class in the building to show students an object lesson in creativity all to our thrill and surprise. The Crocktopus, now called a Dinohorsephant is one of the main characters in my latest book "The Adventures of Chester Peabody Bear In Mural Land." 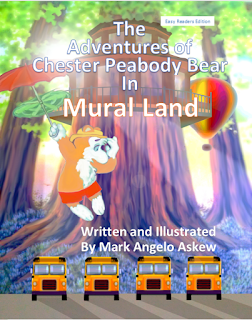 "The Adventures of Chester Peabody Bear In Mural Land"


Do you have a serious side? One that addresses the realities of this world?